Interventions by the Roger De Haan Charitable Trust (RDHCT) have helped to bring about improvements to the lives of thousands of people who live in Folkestone and the surrounding area. The Trust has a long history of supporting charitable causes, events and groups in south east Kent, with a particular focus on Folkestone and nearby towns and villages.

Since 2003, charitable donations of tens of millions pounds have been awarded to projects that benefit the communities of Folkestone, Hythe, Romney Marsh and the North Downs. The Trust has made donations to projects and causes outside this area, particularly in south east Kent, details of some of which can be found in case studies elsewhere on the site.

The Trust has made substantial commitments to provide further funding for projects that have yet to be completed. The following paragraphs describe in more detail some of the interventions that have specifically benefited communities in and around Folkestone. Donations have also been made to many other projects that directly or indirectly benefit residents in the area, including: Kent Air Ambulance; Kent Association for the Blind; Pilgrims Hospice; Multiple Sclerosis Therapy Centre (Canterbury); Hi Kent (supporting deaf people); Carers Support; Bipolar UK; Young Lives Foundation; Kent Crimestoppers; Kent Search & Rescue; Marie Curie; Stroke Association.

Some £18 million has been dedicated by the Trust to sports projects in and around Folkestone. Key sports facilities have been designed and built from scratch, including Three Hills Sports Park, a multi-sports centre in Folkestone that opened in 2013, providing a club pavilion, hockey, cricket, running and netball pitches and facilities and a large indoor sports hall, enabling local clubs to train year-round.

F51 is a major new centre for urban sports, also funded in full by the Trust, with multi storey provision for skateboarding, BMX, climbing, bouldering and boxing. Thought to be the first of it kind in the world, the Centre is due to open in 2019, and will be run by Shepway Sports Trust (SST), an independent charity dedicated to improving access to sport and recreation for the community in Folkestone, Hythe and beyond. SST has received significant financial support from  RDHCT with the aim that in time the charity can become self-sustaining. It promotes participation and excellence in a wide variety of sports, working together with all of the primary and secondary schools and the vast majority of sports clubs in the area.

Shepway Sports Trust is also a key partner in the Folkestone Sea Sports initiative, which provides facilities for kayaking, paddle boarding and dinghy sailing from the sandy beach near the harbour. RDHCT has donated funds to buy equipment so that schools, community groups and individuals can easily access activities on the water.

In addition to these flagship projects, RDHCT has provided £1.5 million in donations to sports clubs across the District of Folkestone and Hythe to help buy equipment, improve pitches, create new facilities and to extend provision. 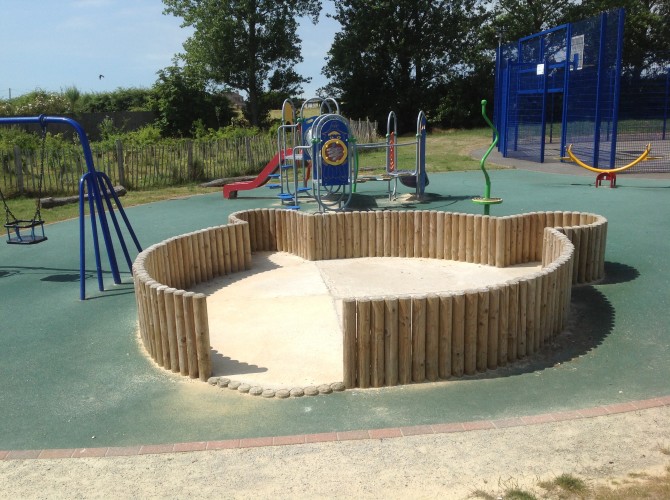 RDHCT has made substantial contributions to improvements to playgrounds and recreation areas, including those at Radnor Park; Lower Radnor Park; Brabner Park: Southern Way; multi-use games area at Canterbury Road; Sandgate. Other locations in the District of Folkestone and Hythe include: Dymchurch; Lyminge; Lydd; Newington; New Romney (three); Greatstone; Selstead

Over £1 million was provided to convert a derelict town centre site in Folkestone into a new community space at Payers Park.

The Trust has provided nearly £4 million for schools and education projects in Folkestone. These include major support for The Folkestone Academy (Primary and Secondary phases), Mundella Primary School, Goldwyn Brook School, St Eanswythe’s Primary School, Christchurch Primary School and The Beacon School. In addition there has been extensive support for organisations that run welfare projects in Folkestone’s schools, including Kent Safe Schools, Kent Council on Addiction, Shepway and Dover Mediation, Rising Sun, Imago and MIND.

There has been significant funding provided or committed to restoring and improving buildings in the conservation area of the old town area in Folkestone, including the Creative Quarter. In addition, many grants have been provided to support and celebrate other aspects of Folkestone’s heritage. This has included a major development project at the Battle of Britain Memorial in Capel and the design and construction of the Step Short Memorial Arch on The Leas in Folkestone, commemorating the role Folkestone played in the First World War. A grant was also made to support Folkestone Town Council’s bid to establish the Museum at Folkestone Town Hall.

There have been numerous grants to churches and community halls, including the renovation of an old chapel in Foord Road, Folkestone, to create the successful community hub Sunflower House. Other donations have been made to Guildhall Street Parish Hall, to the Parish Church of St Mary & St Eanswythe, to Holy Trinity Church and to All Souls Church and Church Hall in Cheriton. There have been donations to fund improvements at many other churches in the District, including in Hythe, Saltwood, Newington (pictured) and in towns and villages on the Romney Marsh.

There has been long term support for the East Folkestone Community Worker and a Community Youth Worker at Harbour Church. Other supported projects have included: Kent Refugee Action Network; The Shed Youth Project; allotments for the Harbour Ward Residents Association; repairs and restoration at St Peter’s Church; the education and community history project A Town Unearthed, a three-year archaeological dig at a significant Roman Villa site at East Wear Bay.

The Town Sprucer initiative, a non-profit organisation run by the community dedicated to improving the environment for communities around Folkestone, has received regular funding from the Trust.

Donations have also been made regularly to organisations and initiatives that help disadvantaged people, including Folkestone Rainbow Centre; Folkestone Churches Together Winter Shelter; Folkestone, Dover and Hythe Samaritans; Shepway Volunteer Centre; Folkestone and District MIND; and ARRCC, whose work has been taken over by Touchbase Care.

Since 2003 the old town area of Folkestone has been transformed into a Creative Quarter, spearheaded since 2002 by independent arts charity the Creative Foundation, which was relaunched in 2019 as Creative Folkestone (CF). RDHCT has provided the funds to acquire and repair, refurbish or in some cases rebuild around 90 buildings that were previously in a state of serious disrepair or derelict. Once completed, the buildings are transferred to the control of Creative Folkestone on 125-year leases at peppercorn rents. The CF rents them as work spaces, living or rental accommodation to tenants engaged in a wide range of creative occupations, from artists and writers to digital media, photographers and film makers.

RDHCT has supported many other arts organisations in Folkestone, including Strange Cargo, The Chip Shop Group, JIM JAM Arts and Folkestone Fringe. RDHCT established a dedicated “Festivals Fund”, administered by Creative Folkestone, which encourages the development of new and innovative arts events and festivals in the town. Other events and Festivals that have been supported, many of them regularly, include the Youth Festival of Remembrance, Folkestone Half Marathon, Folkestone Coastal 10k Race, Multicultural Festival, Charivari Day, Folkestone Harbour Festival, Skabour Festival and a variety of events at Christmas.

In neighbouring towns and villages, events and festivals that have been supported include Hythe Festival, Hythe Venetian Fete, JAM on the Marsh, Sandgate Sea Festival, Dymchurch Day of Syn and Turn the Tide Festival.

The Sidney De Haan Research Centre for Arts and Health, part of Canterbury Christ Church University, was set up in 2003 with substantial support from RDHCT. Named in honour of the co-founder of Saga and of the Trust, who was diagnosed with vascular dementia towards the end of his life, the Centre seeks to examine the potential impact of engagement with the arts and culture on people’s well-being and health, particularly those who have a variety of medical conditions. The Folkestone centre has established a worldwide reputation for the scope and quality of its research, and is regularly invited to national and international conferences to present evidence it has gathered.

Numerous grants have been made to local charities that provide support for the welfare and health of people in Folkestone. Support has also been offered to national charities where they have introduced programmes directed specifically to help communities in the local area. For example, Hope For Tomorrow provides a mobile chemotherapy unit, enabling people to receive regular treatment without the need for uncomfortable and perhaps distressing journeys to hospitals; Marie Curie nurses provide end of life care in the Folkestone area, supporting those with a range of conditions and their families through difficult times; the Trust has provided grants to a range of projects that provide counselling to young people, and in 2018 helped to instigate a new programme that aims to support people experiencing challenges with mental health, working with a number of local agencies.

"I would like to sincerely thank you and the Trust for awarding this grant for a second year. This will allow us to build on our previous work and will very much increase our ability to serve the needs of local residents."
Sue Day, District Manager, Citizens Advice Shepway

"Thank you so much for your extremely kind donation, which will be used to establish Kit Stores in Brockhill Park Performing Arts College and the Folkestone School for Girls, for use by disadvantaged pupils. Thanks to your generosity, many more pupils will be able to embark upon their expeditions, thereby gaining invaluable opportunities for personal growth and building practical skills."
Claire Moore, The Duke of Edinburgh's Award.

"On behalf of everyone at the Stroke Association and the people who we help I would like to thank The Roger De Haan Charitable trust for your most recent donation of £10,000 in July 2017 towards our Moving Forward After Stroke Programme in Folkestone. Your generous donation is helping stroke survivors to get back on their feet and take back control of their lives. The programme is having significant benefits in terms of both physical and mental health and well being, giving participants hope for a healthier and happier future."
Emma Goring, Stroke Association.